This Key Stage 3 Badminton England Smash Up Resource provides a range of modern Badminton challenges ideally suited to Key Stage 3 Pupils (aged 11-14). The Smash Up resource contains 25 pages of content that covers most types of shot and provides some tactical problems for pupils to solve. The resource is structured over 12 lessons which provides teachers with a ready made lesson resource for each session. It can also be used within extra curricular clubs and as a resource for peer and self assessment. The resource content includes:

Each lesson is structured into three parts including: an introduction to the skill, skill development and then a conditioned game. An example of the lesson structure from lesson 11 – Backhand Overhead Drop is provided below: 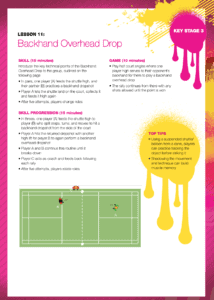